Teachers have a wealth of transferrable skills which can be applied in other industries….

Before I start writing about teaching and learning in a year 1/2 class, I’d like to share some aspects of my summer holiday. Teachers have many skills that transfer into other work fields and until we have an opportunity to do something different, we don’t necessarily realize this.
My holiday included supporting two Australian companies at Messe Frankfurt Heimtextil 2013.

Final Report Heimtextil 2013  Heimtextil 2013 kicks off the new trade-fair year to a great start with 2,658 exhibitors from 62 countries and 66,000 visitors  Increased level of internationality on the visitor side: 67 percent of trade buyers came from outside Germany  Messe Frankfurt to expand portfolio of events with the launch of Heimtextil India in June 2014 With 2,658 exhibitors from 62 countries (2012: 2,601*) and growth for the third year running, Heimtextil 2013 represented not only a successful start to the new furnishing season but also to the new trade-fair year. Around 66,000 visitors from 128 countries (2012: 67,451[1]) came to the trade fair in Frankfurt, which closes its doors today. “Heimtextil has once again underscored its preeminent position as the world’s leading trade fair for home and contract textiles”, said Detlef Braun, Member of the Executive Board of Messe Frankfurt. “The fair also succeeded in maintaining the number of visitors at an almost constant level despite the difficult economic climate prevailing at present.”

Few Australian companies exhibit at the Messe Frankfurt thus it’s a credit to these companies that they are able to exhibit at this level. I enjoyed the experience immensely and met numerous people from around the globe and was also able to view the best of Europe in home textile. Companies: Kelly and Windsor & Creswick Woollen Mills : Australian Made
Next stop: St Anton – AUSTRIA
I’ve written a number of times about my passion for skiing and St Anton am Arlberg is amazing. Skiing in Austria is something skiers dream about. Mega runs, amazing snow, restaurants dotted everywhere, an efficient lift system and beautiful views everywhere. I’ve chosen a few photos of my many to share here. I’d like to thank the Raimund Sattler family of Hotel Grischuna for their wonderful hospitality and cuisine. 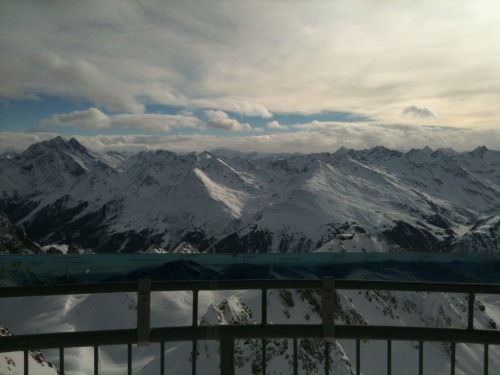 Next stop Ischgl and I was not disappointed. Wow! Once again the accommodation was incredible. Hotel Trofana in the heart of Ischgl offers everything.- luxury at an affordable price… Once again the skiing was mind-blowing on the ‘groomers’ or off, and the walking travelator from the slope to the village was something I’ve only seen at airports. Yes, at the end of an exhausting day skiing this was something I loved. And skiing into Switzerland for some duty-free at Samnaun was another highlight.

I could keep going here, but I think everyone reading my post would understand that skiing in Europe was in my Top 10 list and remains there.

Now back to teaching and learning….

Tagged as skiing, the teacher who loves to ski